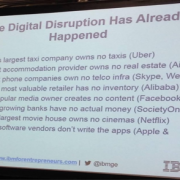 I’ve been seeing this slide a lot recently. Each time it gets posted the list has got a bit longer. It rarely seems to get posted with any real message other than “oooh, digital disruption”. But what is its actual point? The ever growing list of facts, on the face of it, looks interesting. The facts appear paradoxical, but aren’t really. They are, in fact, statements of the obvious, but dressed in intrigue. Let’s take a closer look.

Taxis: Many of the world’s smaller taxi companies don’t own many taxis either. The drivers are self employed, owner drivers – same as Uber. The taxi company owns the booking infrastructure and controls how the customer books a ride. Same as Uber. It’s an intermediary model. The web is fantastic as an intermediary, it allows efficiency and vastly increased scale. It means that Uber can offer the same cheap fares as (or even cheaper than) your local taxi company on a massive scale. Ignore that fact and your intermediary business is dead.

Accommodation: The world’s largest providers of business accommodation and travel own no hotels or airplanes. Amex Corporate travel has been doing it for years. It’s an intermediary model. AirBnB have brought new providers onto the market place who can offer accommodation way below the price of the existing providers.

Inventory: Alibaba don’t have inventory. Neither does ebay. For that matter the largest “retailer” of fine art doesn’t own the paintings it sells. Sotheby’s have been at it for a long time. It’s an intermediary model. They connect buyers and sellers.

Telco infra structure. Why would a company based on web comms own telco infrastructure? The web is great at transmitting data, although an awful lot of it gets transmitted on other “Telcos” infrastructure. If it weren’t for them, Skype wouldn’t have a business. The lesson here is that if your business is about transporting large quantities of data in any form for your customers, and you are too wedded to the way you’ve always done it, someone will use technology to walk around you.

Content: Most popular bookshops didn’t write any books. Most record shops didn’t make music. People have been providing content produced by other people forever. Sheet music sellers were doing it in the 19th century. The way it is done has changed beyond recognition. One of the big differences is that much of the ‘content’ provided by Facebook used to be provided directly from one person to another for free, when they met. Or talked. It was free then and it still is. The means of delivery means that we can give away our free ‘content’ on a colossal scale. The internet is good at that.

Money. Most banks don’t have much money either. It’s their customers’ money. People deposit cash which the bank then lends to others. SocietyOne is interesting. It finds people who want to lend money and puts them in touch with people who want to borrow it. They call themselves a peer-to-peer lending company, not a bank. People have been lending people money for as long as there has been money. Digital makes it easier to do on a massive scale.

Movies: Blockbuster Video were the largest supplier of movies back in the day. They didn’t own cinemas either, because they provided movies for people to watch at home. Just like Netflix do now.

Software: The biggest sellers of software don’t write the apps. Supermarkets are the biggest suppliers of milk but they don’t dairy farm. Of course they don’t, they’re a store. They sell stuff made by other people. So do Google and Apple. Maybe that’s why they call their points of sale “Stores”.

There is, of course, a lesson here. All the businesses above existed in another form previously. They carried on happily doing what they’d always done until either (a): new competitors used the incredible ability of the web to facilitate their intermediary business and bypassed more traditional models of customer acquisition or (b): in a data provision business, books, films, conversations, xrays etc., they used the web’s incredible capacity for data transport to deliver that differently. I want it now. On demand. The web allows Uber, Netflix and the rest to deliver like that. On demand. Usually cheaper than the existing providers. Not surprisingly, customers like it.

The really interesting part is that the businesses who were in the game before aren’t the ones who made the leap. All of which tells us that we need to keep our eyes open, to look at our businesses dispassionately and think about the leap that would kill them (if there is one), then to make that leap before someone else does.

How much can digital & social alone really grow your business?

Applying neuroscience to improve your marketing effectiveness – No.1 Gamification...
Scroll to top